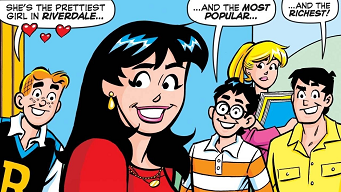 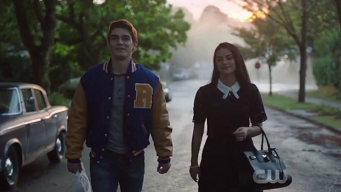 I'll try to tell my story using the language I have to work with, but I would like to include what I know of our partnership. I have very limited, if any, rights to tell of her, but the love between Svāhā and Agni has references in the popular comics Archie Andrews and Richie Rich. Many of the characters in each story parallel characters in the other.

Agni is Archie in the one and Richie in the other, where Svāhā (of course descended from being Lakṣmī, Goddess of wealth) is Veronica Lodge and Mayda Munny. My first belief in whom she is in the real world met with limitation, even a call from the police when I tried to communicate further with her. I believe that some of that tension has to do with her way of relating to Transcendental Meditation (TM)'s Gainesberg and/or the work that actress Neve Campbell has done with Woodsboro in the Scream movie franchise, both of which have been cleaning up Gainesville, Florida, from the temporal vicinity of Danny Rolling's murder of Sonja Larson.

I see Sonja Larson as being close to the Svāhā type of goddess, though one quantum level of the universe beneath ours, while ex-University of Florida quarterback Danny Wuerffel and I as Agni-ish but still basically lunar level gods, I'm pretty sure, have done a lot of healing work in relation to Danny Rolling's role. So we have a few Agni-ish and/or Sun Gods, I'm told including actor Robert Redford and glamor model Marcello Bravo, husband of model Markéta Štroblová (Little Caprice). There are five of us all together, me at the one extreme being Agni (Rāma) and another boyfriend of Markéta being Aruṇa, charioteer of Sūrya, at the other extreme. Our goddesses are two, the first Svāhā (Sītā) whom the police told me not to communicate interest with further, the second being Neve Campbell.